CIEMAT stands for 'Centre for Energy, Environment and Technology Research'. The CIEMAT is a Public Organism for Research and Technological Development whose main goals are the development of energy resource, generation and environmental solutions.

The Plataforma Solar de Almeria (PSA), a division of the CIEMAT, is the largest concentrating solar technology research, development and test centre in Europe. It is located in the Tabernas Desert, 35 km from the city of Almeria. 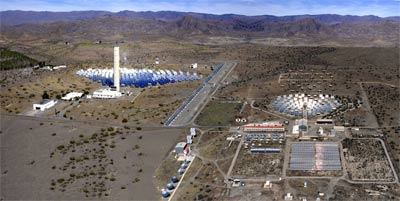 The PSA is basically a testing facility for applications of solar concentrating technologies. These technologies make use of parabolic/spherical mirrors to concentrate the direct solar irradiance, thus obtaining a high-density radiant energy source which can be transferred as heat to many industrial processes of commercial value.

Depending on the geometry of the solar concentrators (field of moving mirrors) different concentrations can be reached and thereby different industrial application temperatures.

The main lines of R&D at the facility are:

The PSA facilities cover the whole range of concentration levels as well as process temperatures, ranging from ambient temperature (heating & cooling of buildings) to several thousand degrees in the solar furnace for materials treatment or solar fuel production applications.

PSA activities are structured around two R&D Units, Solar Concentrating Systems and Environmental Applications of Solar Energy. The first is devoted to developing new and better ways to produce solar thermal electricity and the second to exploring the chemical possibilities of solar energy, especially its potential for water detoxification, desalination and disinfection.

The Plataforma Solar de Almería is offering access to the following facilities for research:

For further information on these facilities, visit the web site www.psa.es or request for further details to access-sfera

sollab.eu where your request will be redirected to the appropriate partner.

The test facilities described above are equipped with all the necessary sensors and instrumentation for data acquisition and the Users will have all the ITC resources they need to process their test data and to transmit them to their home laboratories.

Some laboratories are also available. There is a chemistry lab for water analysis, a materials lab equipped with a SEM microscope and a radiometry lab for calibration of the instruments used to determine the flux available in each experiment.

Each User is under the direct responsibility of a PSA Installation Project Leader (IPL) corresponding to his line of work or installation so the User projects can benefit most from the facilities.

Free bus transportation between PSA and Almeria will be available to all Users.

Furthermore, the PSA’s Access Manager and programme secretary will act as their hosts, caring for such details as travel arrangements and lodging and, in general, attempting to solve any difficulties the User may come up against.